The Kept Woman: A Novel (Will Trent #8) (Hardcover) 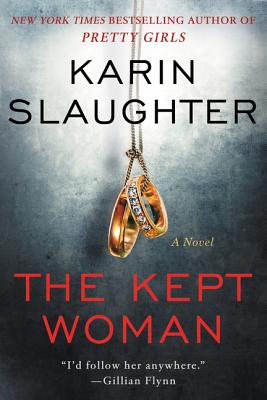 “The Kept Woman features Georgia detective Will Trent in a compelling mystery involving a superstar sports figure, his wife, and a rape. The athlete had already been cleared of the rape allegations when a dead man is found in a building he is making into a high-end club with other wealthy investors. At the scene, blood is found that doesn't match that of the dead man, indicating that there is a second victim - a woman - in dire trouble. Another suspenseful tour de force from Slaughter.”
— Barbara Kelly (W), Kelly's Books to Go, South Portland, ME

The Skimm Reads calls it "a thriller that's part True Detective, part The Girl On the Train. All parts gripping."

Husbands and wives. Mothers and daughters. The past and the future.

Secrets bind them. And secrets can destroy them.

The author of Pretty Girls returns with an electrifying, emotionally complex thriller that plunges its fascinating protagonist into the darkest depths of a mystery that just might destroy him.

With the discovery of a murder at an abandoned construction site, Will Trent of the Georgia Bureau of Investigation is brought in on a case that becomes much more dangerous when the dead man is identified as an ex-cop.

Studying the body, Sara Linton—the GBI’s newest medical examiner and Will’s lover—realizes that the extensive blood loss didn't belong to the corpse. Sure enough, bloody footprints leading away from the scene indicate there is another victim—a woman—who has vanished . . . and who will die soon if she isn’t found.

Will is already compromised, because the site belongs to the city’s most popular citizen: a wealthy, powerful, and politically connected athlete protected by the world’s most expensive lawyers—a man who’s already gotten away with rape, despite Will’s exhaustive efforts to put him away.

But the worst is yet to come. Evidence soon links Will’s troubled past to the case . . . and the consequences will tear through his life with the force of a tornado, wreaking havoc for Will and everyone around him, including his colleagues, family, friends—and even the suspects he pursues.

Relentlessly suspenseful and furiously paced, peopled with conflicted, fallible characters who leap from the page, The Kept Woman is a seamless blend of twisty police procedural and ingenious psychological thriller -- a searing, unforgettable novel of love, loss, and redemption.

Karin Slaughter is one of the world’s most popular and acclaimed storytellers. Published in 120 countries with more than 40 million copies sold across the globe, her twenty-one novels include the Grant County and Will Trent books, as well as the Edgar-nominated Cop Town and the instant New York Times bestselling stand-alone novels Pretty Girls, The Good Daughter, and Pieces of Her. Slaughter is the founder of the Save the Libraries project—a nonprofit organization established to support libraries and library programming. A native of Georgia, she lives in Atlanta. Her standalone novel Pieces of Her is in production with Netflix, starring Toni Collette, and the Grant County and Will Trent series are in development for television.

“Exciting...an intense look at the nature of loss and control, and how love can taint both.”
— Publishers Weekly

“Suspense that continually ratchets upward, a revealing look at domestic violence in all levels of society, and the continued development of a tight-knit cast of characters. This is prime Slaughter, must-read fare for thriller fans.”
— Booklist (starred review)

“A thriller that’s part ‘True Detective,’ part ‘The Girl On The Train.’ All parts gripping.”
— The Skimm